Advanced Factories hosts the next April 11 the final of the Universal Robots 2019 Hackathon.

Three universities, thirty participants and three challenges of voice recognition, augmented reality and data mining to get a collaborative robot (cobot) to assemble a mobile device live. These are the pillars of HackTheCobot, the robotic programming test organized by Universal Robots that will take place next April 11 in Barcelona within the framework of Advanced Factories, the reference event in industrial innovation and automation.

For four months, students of computer science, telecommunications, mechanics and electronics of the Polytechnic University of Catalonia, the University Miguel Hernánde de Elche and La Salle have been preparing for the final that will take place in Advanced Factories.

Throughout the HackTheCobot, students must present the results of their work by completing three live challenges while the robot performs the assembly of a mobile device. The first challenge will be to command a model UR3e cobot by voice recognition and dialogue. The second will be based on using augmented reality to provide real-time information on the status of components, security settings, production data and upcoming movements. In the third, participants must monitor data in real time and in the cloud about the operating status of the robot, emergency stops, production data, etc.

An independent jury with experience in the use of Universal Robots cobots will evaluate the participating projects to choose the winning team. This jury will be formed by Víctor Canton, Industry 4.0 Project Manager de la multinacional Continental; Enric Vila, technical director of Vicosystems, and Joaquim Torras, commercial technician of Amida 4.

“Its the second year in which we organize a hackathon and this time we will live it in the incomparable setting of Advanced Factories. HackTheCobot is a golden opportunity to know and recognize the talent of the young programmers of collaborative robotics, since there is no factory of the future if we do not have the workers of the future, prepared for the fourth industrial revolution” says Jordi Saboya, engineer of technical support and responsible for UR + in southern Europe and the Middle East. 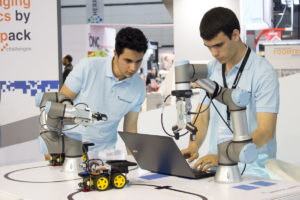 Keep on the loop
Be up to date to the latest news from industry 4.0

Please, leave us your personal data