Discover the latest solutions on industrial automation, robotics and technologies to transform your business

Learn and be inspired at the biggest international forum in Spain about 4.0 Industry

Factories of the Future Awards

Enjoy all networking activities prepared for you

Home > Advanced Factories > How to Get There

How to Get There

Centro de Convenciones Internacional de Barcelona is located at the confluence of Leonardo da Vinci Square, s/n and Willy Brandt Square 11-14 with Passeig de Taulat (Barcelona). To access Advanced Factories you have to get Access B, on the street parallel to Passeig de Taulat. Check the directions with Google Maps here, or download the map with the exact location here 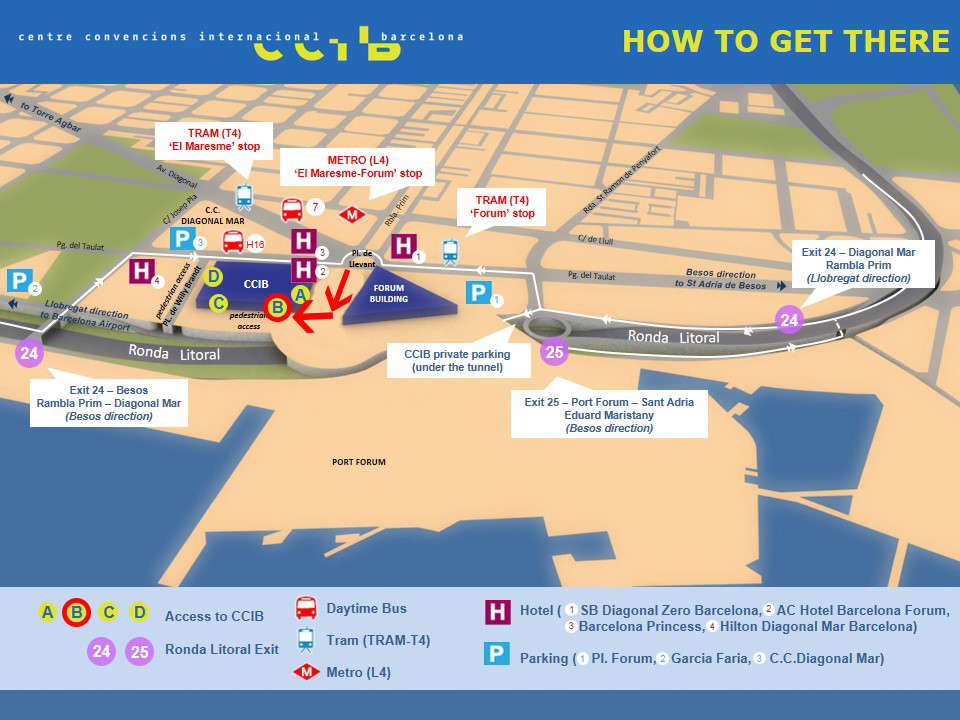 GET CCIB BY CAR

If you are going to the CCIB from the city centre by car, the best option is to take the Avenida Diagonal until the end.  Ronda Litoral (exit 24) is the most direct way to reach the CCIB from the Airport or from out of Barcelona.

An estimate journey time from the Airport or the city center is 25 minutes, depending on traffic. To park your car, your best choice may be BSM Parking (Ernest Lluch i Martín – 08005 Barcelona)

FROM AND TO THE AIRPORT

The Aeroport del Prat  is located 13 km southwest of Barcelona and 20 km from the CCIB.

The C-31 motorway connects the airport to Barcelona. To enter the city you can take Gran Via or Avenida Diagonal, which are the most direct access to the city center, and Ronda de Dalt and Ronda Litoral, surrounding the city.

The bus frequency is one every 10-12 minutes and the average travel time per journey is 30 minutes.

The taxi ride takes about 20 minutes. The rates change depending on the schedule.

You can book a taxi in some of the following websites: BarnaTaxi or Radiotaxibarcelona.

The best options for traveling within the urban area of  Barcelona are: train, bus, metro and tram. Visit the following websites:

Next to Plaça Catalunya there is Urquinaona station or the metro yellow line (L4)  that leads directly to the CCIB by Maresme-Fòrum station.

You can also get to the CCIB by bus: lines 7, H16 and tram: Fòrum station.

All these means of transport leave you just few minutes away from the CCIB by foot.

Visit
Keep on the loop
Be up to date to the latest news from industry 4.0

Please, leave us your personal data